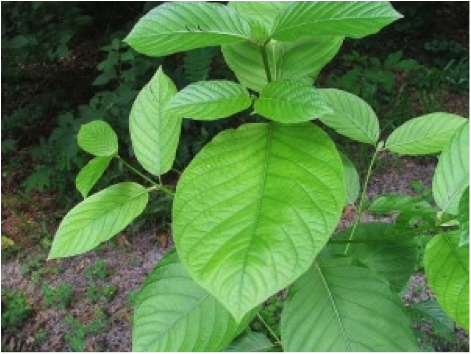 Kratom is another name for the leaves of the mitragyna speciaosa tree.  While the tree is indigenous to Southeast Asia and the leaves have been used for medicinal purposes in that region for centuries we are seeing an increase in use for recreational purposes in the US.  The leaves are dried and powdered and can typically be ingested in the form of tablets, capsules, powder or liquid.  In the last few years we have seen synthetic drugs like Spice, K2 and bath salts that have started out as being legal.  While Kratom is not a synthetic drug like these it is entirely legal to possess and use in the US, for now.  It was recently added to the Drug Enforcement Administration’s list of “drugs and chemicals of concern.”

The effects of this drug can vary depending on the amount taken.  In small doses it can act as a stimulant, producing effects similar to cocaine or methamphetamine.  In large doses its effect resembles that caused by opiates like heroin or prescription pain medications.  In any case, it can be as addictive as any other substance of abuse.  Even sites that promote the sale of Kratom warn of the addictive possibilities of the drug.  They also warn that prolonged use can produce hallucinations and severe and lasting psychiatric or physical symptoms like delusions, listlessness, tremors, aggression, constipation and nausea.  There is growing concern for this and other new drugs of abuse for those of us in the addiction recovery field and medical fields.  While much is known about the long term effects of drugs like marijuana, cocaine, heroin, alcohol and other widely known substances of abuse.  There is really very little known at this point about the long term effects of Kratom.  Although it has been used for centuries more research must be done to determine just how dangerous it can be.

Video clip of report by KXAN News in Austin, TX

About the Author
Matt Brown is an interventionist and treatment professional with a career in the addiction field spanning over eight years. In recovery himself and a father of 4, Matt enjoys spending his off time with his wife, Katie, and their children. Matt resides in Georgetown, Texas, a suburb of Austin, and serves addicts and their families nationally.
Social Share